Matt’s been making furniture. As you recall, we moved into an empty house. While we did buy several things such as mattresses, a fridge, an oven, a washing machine and a bed for the kids, Matt made the rest. And since we had very little else to do with our time, we made it our job to do it as cheaply as possible. So Matt made our furniture out of driftwood we brought from the beach and pallets. That’s right, pallet furniture. We are bringing hipster life to the mountains of Costa Rica. 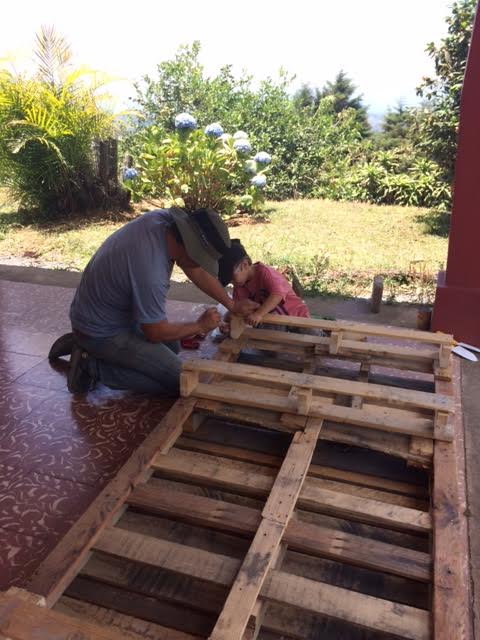 But where to find pallets or tarimas? It took a week or so of asking around and pulling over at every likely warehouse but we finally found a cement warehouse that would sell us their tarimas for less than $2 each. Did they think we were crazy gringos? Definitely. But it didn’t matter because we were in business!

As you may recall, this was our kitchen when we moved in.

Other than one shelf in the pantry and the drainboard on the sink, there was absolutely nowhere to store or prep anything. With a combination of driftwood, pallets, nails, hooks and cast-off crates from our local grocery I think we outfitted it rather nicely, if I do say so myself.

These tables are especially great. 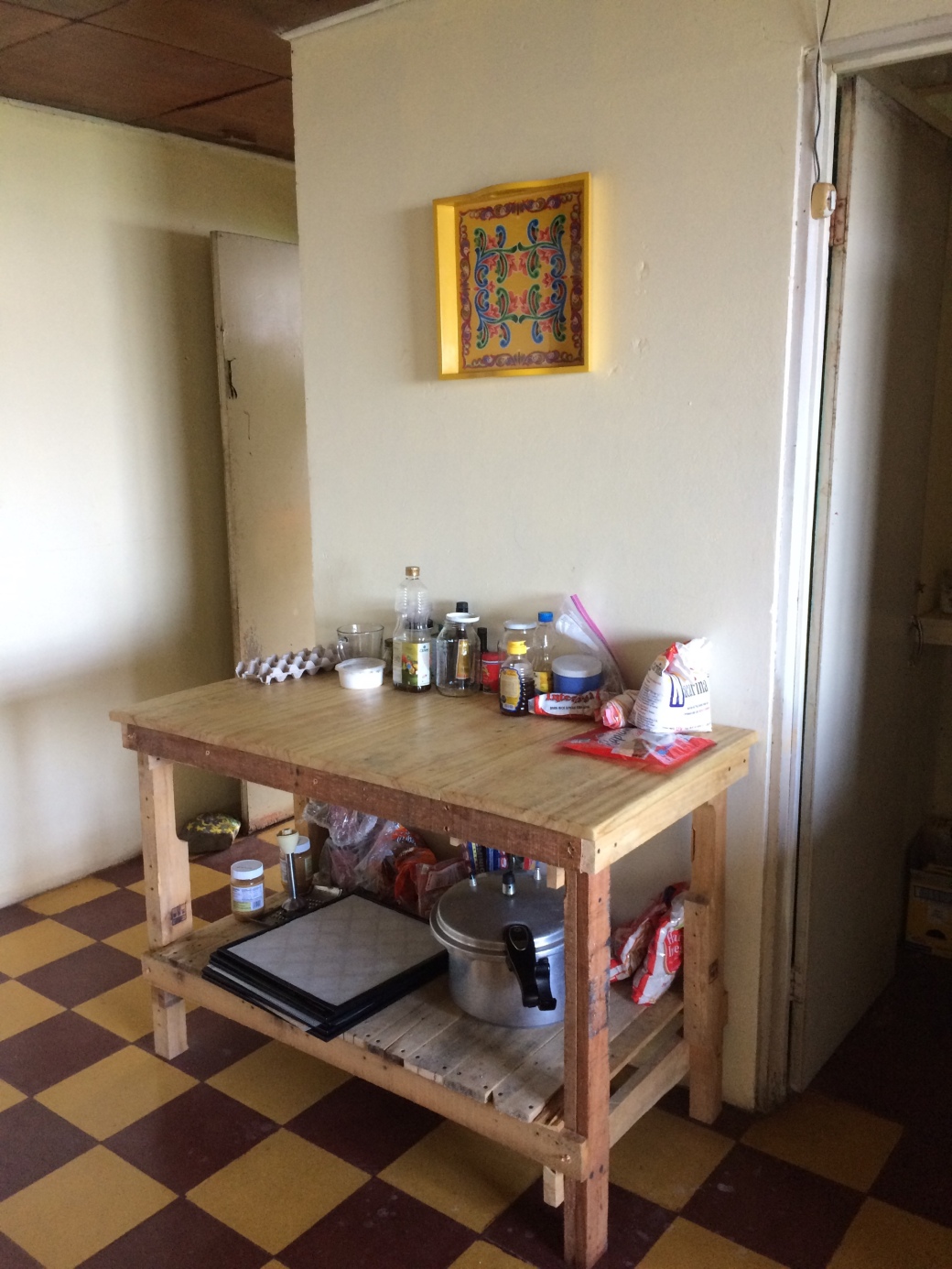 As the rest of the house was similarly lacking in places to put anything Matt built clothing shelves for the kids out of driftwood.

In addition to tables for our bathroom and bedroom and a shelving system in the laundry room for tools, he also made the kids this art table. In short, he was busy.

One item I felt we absolutely had to have given the aesthetic we were cultivating was a giant wooden cable spool for a coffee table. When I was a child my father built me a big playhouse. Inside I had a kitchen table made out of one of these spools. Ever since then I have wanted to have another spool table. This seemed the perfect opportunity. Where to find one though? I made Matt pull the car over countless times as I saw likely shops and factories that might give or sell us one. Who knew how many words there were for spool in Spanish? I talked to probably five different people about them and they all used a different word. I’m still not 100% what the official word is. Still, in the end we prevailed and a warehouse gave us one. Or, as they say here, it was a regalito or “little gift”. Success!

With this victory fresh in my mind I decided to see if a hardware store might sell me some smaller spools for night and side tables. To my delight, these were considered regalitos as well. I went for it and asked for six. Suki painted the one in their room with a friend.

When my mom came to visit she outfitted another one with a bottle cap top.

We also needed some couches/guest beds. It was fun to plan how we would do this on the cheap. I geeked out on Pinterest to figure out cushions. It looked like foam was the cheapest, easiest way to go which then required figuring out exactly where one can buy that. Eventually I found a tiny mattress/foam shop and the owner, Arturo, and I were soon on a first-name basis. Matt deconstructed some pallets to make platforms for the couches. Here’s Django trying out the mock-up.

And ta-da! The final product: 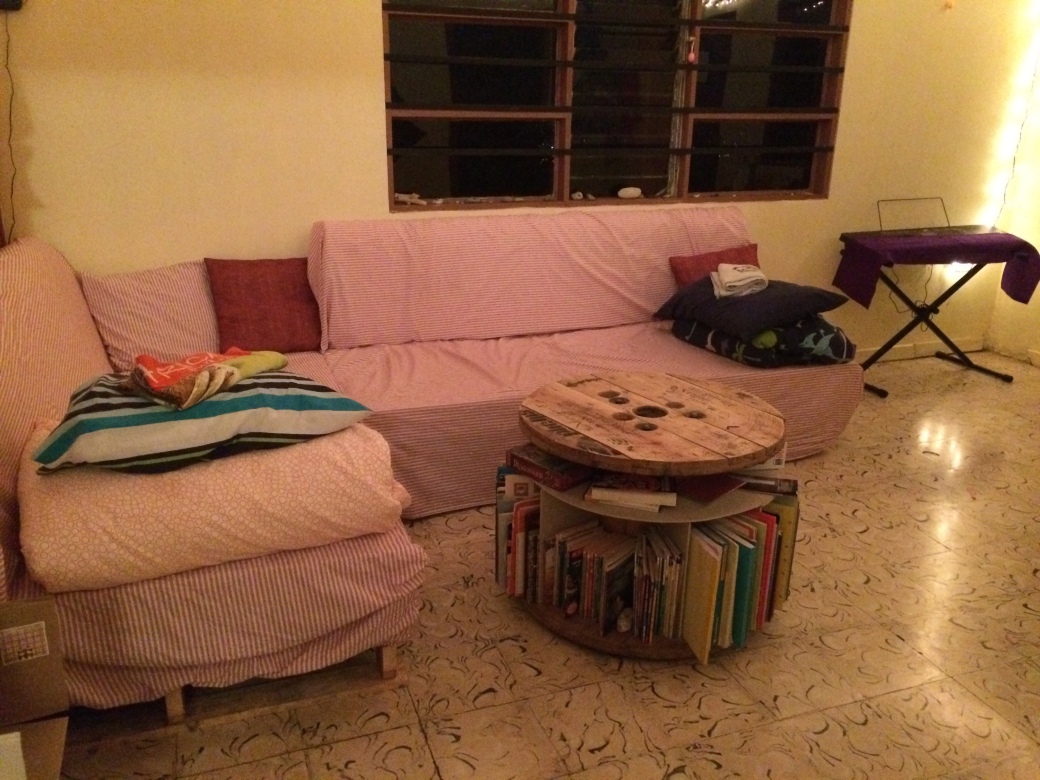 Matt surprised me by turning the spool coffee table into a much needed bookcase. Love.

Of course, we also needed somewhere to enjoy the lovely view from our patio. When we decided to move to Grecia I declared I would buy us some of the rebar and elastic twine chairs we saw on every porch in the country. I knew people made these and sold them from the back of trucks around town. After several weeks without a single sighting of such a truck, however, I resorted to Facebook. Sure enough, there were several local folks who would make and deliver them to you. I shopped around and found one who would not only do the colors I wanted but also offered free delivery. Since these are relatively expensive at $45 a pop, we only bought two. Two chairs were not enough for a patio where we planned to entertain. So Matt built us a little couch and we softened it by creating a cushion out of the old foam mattress topper from our beach house and a piece of fabric we had from the States. Two throw cushions from a store in town later and we had our patio done. 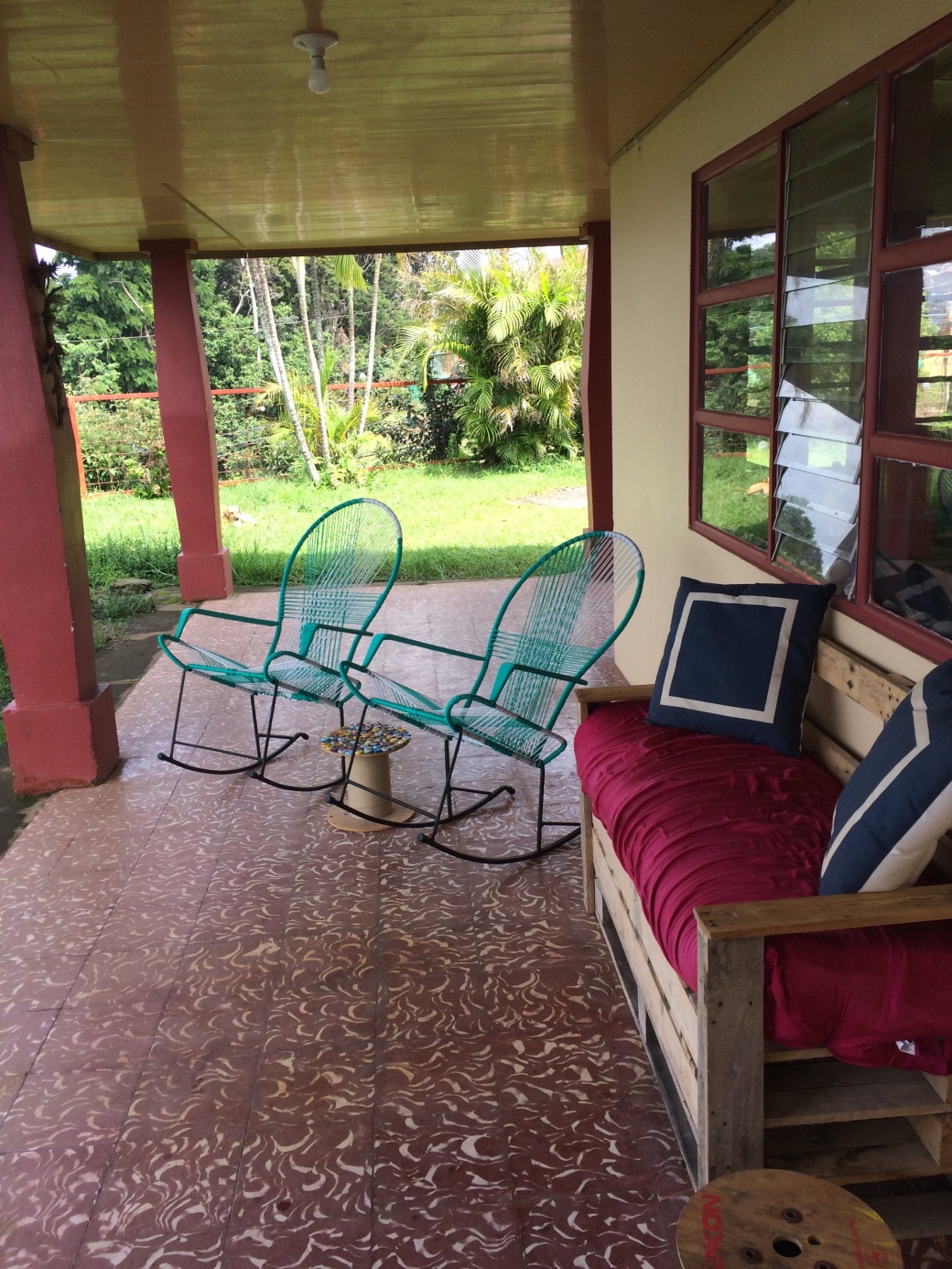 With Matt’s furniture, Christmas lights strung in a swirl on the ceiling and the kids’ artwork on the walls, the house soon became very, very cozy.

One expat friend asked how we liked our college dorm but we were unfazed. I was thrilled that Matt could make us exactly what we needed. To us the unfinished wood was warm and welcoming. After a flurry of activity for six solid weeks, our house was a home.

3 thoughts on “What Matt’s been up to”